Coins of the Russian Empire (beginning of the XVIII century - 1917)

Peter the great became Tsar in 1682 together with his older brother Ivan. But before 1689, the government was actually carried out by their sister Sophia, until she was banished to a monastery. Ivan did not take any part in politics, although until his death in 1696 formally remained the legitimate ruler.
After a long journey through Europe, Peter launched in Russia large-scale reforms, one of which was cash. Since 1700 entered into circulation copper coins Denga, Polushka and polupolushka, and then there was the copper penny. Initially, they were struck on the foot 20 roubles from a pood. Soon start to mint large silver coins are round, denomination: dime (=10 cents), the ruble, poltina and polupoltinnik. Then limited minted silver penny "ten money" the same value. Penny, the scale continued to be made until 1718, all the larger denominations were multiples of her weight.
A new type of money was introduced gradually, to avoid popular unrest. By the end of the Northern war in 1721, Peter declared himself Emperor, giving rise to a new era. In 1718 the last time the date is indicated in the form of letters, and in 1723 appear copper 5 cents (on foot 40 rubles of pounds), who completed a monetary reform. Under Peter I for the first time in the appeal do the gold coins called ducats. Their rate was floating (about 2 rubles), but the weight has long remained the standard - of 3.47 g. Also produced double nickels.
In this section you will find information about the coins, minted after the beginning of monetary reform. Pre-reform presented here. 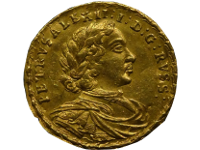 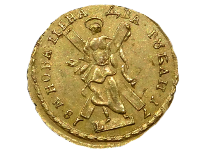 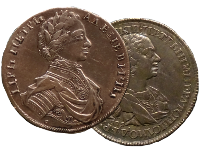 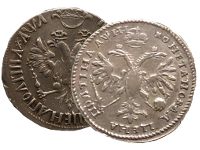 5 rubles 2017 (MMD)
read more
All materials on the site are protected by copyright, copying without the consent of the administration is prohibited. When using quotes, reference to the source is necessarily

To save a bookmark for this page, press "Ctrl + D". In the future, you can find it in the list of your bookmarks.

All materials on the site are protected by copyright, copying without the consent of the administration is prohibited. When using quotes, reference to the source is necessarily