Coins of the Russian Empire (beginning of the XVIII century - 1917)

In the summer of 1762 coup d'etat happened, and then ascended the throne the wife of the former Emperor - Catherine. Peter III was soon killed. Catherine was descended from a German family and had ancestors of the Romanov dynasty. She ruled for 34 years, this period is considered the "Golden age" of the Russian Empire. For great achievements in domestic and foreign policy subsequently received the title of great. It is the most significant stratification of society, the nobles get more privileges. Achieved great success in the cultural development of the country, from Europe brought the priceless masterpieces of painting, museums were created.
Copper coins continued to mint is still the foot print of sample 1757, but with the monogram of Catherine II. Only in 1796 produced the raising of the foot 2 times and are new types of copper coins, which was never firmly established in the monetary circulation. From 1763 to 1781 minted much lighter "Siberian coin" from the copper mines of Kolyvan, which contained a mixture of gold and silver. For the first time in the history of minted silver coins with denominations of 20 and 15 cents. Also known trial silver 5 cents and trial "Pugachev" ruble. 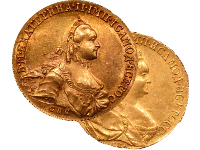 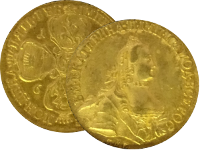 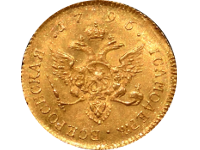 Coins for Palace use

Kopeck "Penny copper Moscow (o/M)"
read more
All materials on the site are protected by copyright, copying without the consent of the administration is prohibited. When using quotes, reference to the source is necessarily

To save a bookmark for this page, press "Ctrl + D". In the future, you can find it in the list of your bookmarks.

All materials on the site are protected by copyright, copying without the consent of the administration is prohibited. When using quotes, reference to the source is necessarily